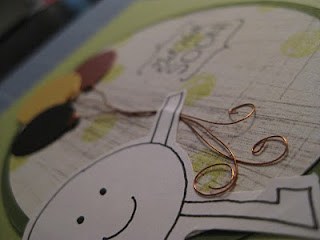 (I like to make cards; it's one of my many passions. This is one I made for my husband's student who had an appendectomy.)

So, on to the subject of this post:
I have had many readers ask me, "When is the next book coming out?" to which I answer, "Well, I'm working on a sequel!"

So, here's some sneak info about the sequel. ;) If you haven't finished reading The Prophecy Box, don't worry, I didn't put any spoilers in.

The sequel follows Jolene, who is the middle of three sisters. Yolande is her older sister and is very selfish. Maelle (pronounced "may'-elle") is her younger sister and is cute and bubbly. Jolene is shy and sweet and she is, so far, my favorite character (even of the characters in The Prophecy Box). The three of them are orphans.

During the course of the book, Jolene and her sisters encounter three boys, Lawrence, William, and ______(haven't completely committed to a name yet), which makes for lots of romantic tension. All three boys are princes; two of them are sons of Camilla. Can you guess who Jolene falls for!? :P

The majority of the story takes place in a rebuilt Northenland and will eventually meander down to Southland, a land of wealth and luxury.
--------------
My progress so far: I'm writing chapter 10, which is a little over 1/3 of the book.

Keep checking back for more sneak peeks into the sequel!
at 9:34 AM

Email ThisBlogThis!Share to TwitterShare to FacebookShare to Pinterest
Labels: hobbies