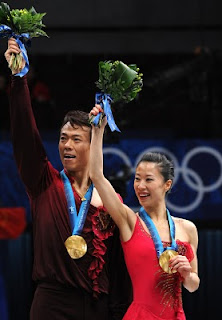 source
Every night, we have had the Olympics on the TV in the background. We'll pay attention to the "hyped" competitors: Shaun White, Apolo Anton Ohno, Johnny Weir, Heather Kearney, etc.
Anyway, on Tuesday night, we were super surprised and excited that China's Shen Xue and Zhao Hongbo won the gold in Pairs Figure Skating. They retired after the last Olympics (in Turino) and got married...so romantic. China decided that they needed a viable competitor in Pairs for the Vancouver Winter Olympics, so they asked them to come out of retirement, postpone their honeymoon, and vigorously train while living in separate dorms and all that jazz.
What a sacrifice! And what a reward!
Anyway, I'm so excited for the Mens' figure skating long program. What are your favorite Olympic events?
at 10:19 AM