What I Learned in Europe - Book Research - Part 1

Part of the reason why I was super excited to vacation to Europe was because I wanted to do research for my sequel...how old architecture looks in person and how the atmosphere of an old city feels. I mean, I had the chance to visit tiny little villages with cobblestone streets! And while all of this can be found through other people's pictures online, it's a different feel when you actually get there.

So, I wanted to start a series of posts about what I learned in Europe, concentrating on setting. 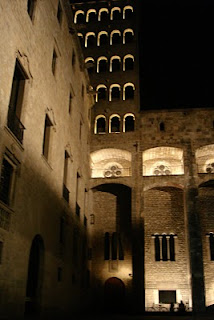 In Barcelona, Spain, my husband and I were wandering the streets at night (because the Spanish are famous for being night owls, staying up 'til 1am). We found this old, really old part of the city that was part cathedral and part structure surrounding the cathedral.

They had these tiny alleyways that, even though there were strings of people wandering through, were totally spooky. Like I was going to be mugged. They were poorly lit and had an echo-y atmosphere. Music floated about as buskers played their accordians/guitars romantically, for money.

I imagined homeless sleeping around here, but it didn't reek of pee. I imagined village folk meandering down these pathways way back in the day...perhaps a line of old nuns or schoolchildren in single file.

It was quite an experience to actually feel the old world pulling me in.

What sparked my interest: there was so much history in the atmosphere that can be described and not described. In my sequel, I want the feel of it to be old, heavy with history...and a little creepy, but still milling about with people.

The challenge: How do you translate such a real feeling onto the page?
at 9:39 AM