Tidbits about The Prophecy Box 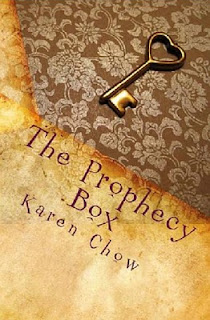 While I sit here brainstorming ideas to generate a blogger following, I thought, Well, I gave some sneak peeks about the sequel, would people be interested in hearing more about The Prophecy Box ?

So, here are some little tidbits/trivia that are not on the official website. ;) (CAUTION: Spoilers ahead)

* The phrase "the kingdom will be paralyzed" came to me in a dream. I don't remember how or what the dream was about, but I remember that phrase very vividly. In fact, a lot of little things come to me in dreams (much like Stephenie Meyer of Twilight fame)...like the premise of the sequel: 3 orphan sisters.

* Robin's part in the story was originally very small. He had no name. He didn't even have a personality. I wasn't even planning on making him human again.

* Unconsciously, I made Robin and Camilla atypically beautiful. Both are healthily plump and are not the stereotypical prince and princess types. However, after the book was written, I was really happy with my unconscious choice because it creates a positive message for teens...that heroes and heroines can be outwardly plain but beautiful on the inside, which is what matters.

* I feel that I aspire to be like Camilla, but am totally not her. lol. However, I am very much like Jolene (of the sequel), especially when I was younger.

* I still have no idea why I included Anna in the story. I tell myself that I wanted to show that Camilla had a best friend (read: not a loner), but she really served no purpose. Why was she there? I don't know.

* I really, REALLY enjoyed writing scenes between Robin and Camilla. They jumped onto the page for me easily.

Anyone have any other questions about The Prophecy Box? I'll answer anything!
at 3:01 PM

Email ThisBlogThis!Share to TwitterShare to FacebookShare to Pinterest
Labels: The Prophecy Box