It is Universally Known... 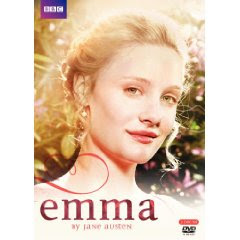 People -- their hopes, their dreams, their aspirations -- there I am the expert. ~Emma Woodhouse

Has anyone been watching Emma on PBS on Sunday nights? It’s the equivalent of A&E’s masterful, and literal adaptation of, Pride and Prejudice.

There are a few recognizable actors:
• Michael Gambon (Dumbledore from Harry Potter or, if you’re a fan of Gosford Park like me, Sir William)
• Jonny Lee Miller (Edmund from Mansfield Park)
• Romola Garai (Amelia from Vanity Fair)

So far, I really like it. All of the characters are portrayed slightly younger than the Gwyeneth Paltrow version.

I like the subtle, modern way that this new Emma expresses herself…watch her facial expressions, she’s totally like a naïve teenager today…though she’s supposed to be 20.

I like the way the costume designers have reused her dresses (meaning she doesn’t have a new outfit for every scene), making Emma seem like a realistic girl living in the early 1800s.

I like the way that this long version of the book emphasizes the relationships between ALL the characters: Jane and Frank Churchill, Mr. Knightley and his older brother John, Harriet and Robert Martin. Even the relationship between Emma and Mrs. Weston (Miss Taylor) is more developed. Of course, these are all possible with more screen time.

I also like the way that Mr. Elton is portrayed. He’s more conceited and self-aware. It totally makes sense why he would marry someone vulgar like Augusta from Bath, just to spite Emma and Harriet.

I can’t think of any real dislikes except that there isn’t much emphasis on distinction of location. When they pan to a wide-screen version of a house, I can’t tell whether it is Hartfield or Donwell or the Weston’s house.

Anyway, I have been a fan of Jane Austen since I was in junior high, like most girls. (She the most renowned author of happy endings!) I eagerly look forward to each and every production of her work. Care to suggest any new ones?
at 12:11 PM