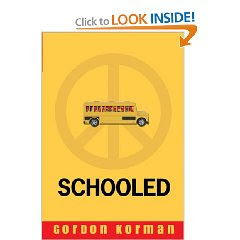 In honor of the Vancouver Winter Olympics 2010, I decided to review an author who is Canadian: Gordon Korman. He’s one of my husband’s (and my sister-in-law’s) favorite YA authors. Mr. Korman started writing when he was a young teenager and became published soon after. Some of his older books are filled with snappy dialogue and hilarious situations. We like Losing Joe’s Place and A Semester in the Life of a Garbage Bag (which is unfortunately out of print).

Since then, he moved to the U.S. and continues to write, though I think his more recent books are too stereotypical (like his Son of the Mob series). However, he moves back to his golden days with Schooled.

His caretaker (his grandmother) goes to the hospital for hip surgery, and Cap moves into a social worker’s home and goes to middle school. He’s immediately voted in as 8th grade president (which is a position reserved for the ultimate nerd in over his head) and is laughed at behind his back. But, Cap definitely rises to the challenge and turns things around in his own way.

It’s a great book for young adults and there’s a lot of truth to his community theories. Sometimes the world should be a place for nature and people to live in harmony.
at 7:14 AM