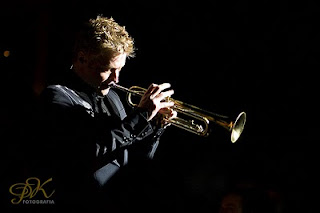 My husband and I don’t go to many live concerts (because they’re expensive), but this one was well worth it. Mr. Botti lived up to his hype. His musicality is inspiring, speaking volumes through the clear pitches of his trumpet. His band is super talented and they were entertaining as well…especially his guitarist, who ambled around the stage, mocking his cousin Cy Smith (a beautiful singer), dueling with the bassist, and enjoying the lively upbeat jams.

Mr. Botti and his band are similar to Wynton Marsalis and his band with their casual style and light tone. Band members walked on and off stage when they weren’t playing. Mr. Botti even tried to get the spotlight to stay on the pianist when he was going off stage, calling out instructions to the stage crew several times throughout the concert. When there was a mic malfunction, Mr. Botti sarcastically joked that that was the moment that all rising stars aspired to, that he always wanted to mess up on stage.

But, what I loved most about the concert was the music. So romantic and dreamy. Even a breathtaking Frank Sinatra encore, with Mr. Botti walking into the audience and playing it a-capella.

He’s a must-see! If you can, try checking out Chris Botti in Boston. We saw him perform on PBS and decided to donate and got the tickets for donating. :)
at 9:49 AM

Email ThisBlogThis!Share to TwitterShare to FacebookShare to Pinterest
Labels: music