Learning about plot structure from Disney 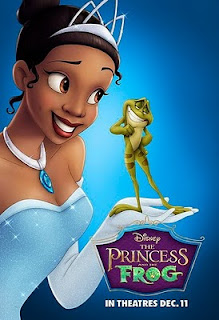 source
As I watched The Princess and the Frog at the cheapie theater, I realized that the plot structure was very similar to the sequel I am writing, which sent little tingles up my spine knowing that I’m doing something right.

So, for those of you who are just beginning to write or want to start, here is a mini-review/lesson for plot structure, taken from The Princess and the Frog. Obviously, we all know that Disney plots work well (and sell!), so I’ll break it down for you. (Note: There will be spoilers from the Disney movie.)

A gripping prologue
A glimpse of the past that identifies the main character's motivation for the rest of the story. One of my writer friends likened a prologue to a fish, poking its head up here and there, revealing details, but is always swimming under the surface of the whole story. In P&F, the prologue is about Tiana's father's advice about working hard and saving money to open his restaurant of dreams. He also said that nothing in life is worth it, if you don't love.

The character development of the hero and heroine
The introduction of the main character, her/his romantic interest, and villain. This part reveals characters' personalities and background. In P&F, we are introduced to Prince Naveen and his quest for a rich bride (because his family lines need to marry into money). We are introduced to the villain and his devious ways. And, of course, we see Tiana and her work ethic.

The next two sections are interchangable
Introduction of a problem
Something that propels the the characters forward and tests their strength...whether it be turning into a frog (like in P&F), or finding a genie's lamp (Aladdin), or becoming a prisoner in a castle (Beauty and the Beast).

Adventure
This section develops the relationship between the main characters so that they learn to care about each other...possibly falling in love. This section usually involves a mission. In P&F, it's Tiana and Naveen's search for the witch doctor to reverse the frog spell.

Separation
There are twists and turns and they all build up to a point, a clash of wills, an epic battle, something that tears the main characters apart. In P&F, it's the fact that the villain has captured Naveen.

Conflict
The epic battle where one has to rescue the other and/or reveal their true feelings. In P&F, Tiana battles with the villian and rescues Naveen.

Resolution/Denoument
Everything is righted and all the questions are answered. This is the part where you know the main characters will live happily ever after.
at 3:14 PM

Email ThisBlogThis!Share to TwitterShare to FacebookShare to Pinterest
Labels: writing