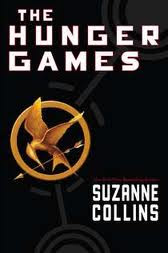 I first found out about The Hunger Games trilogy from Entertainment Weekly because they kept projecting possible actors for the main characters. And then, after three, yes, THREE (how lame is that? lol), different EWs talking about it, I finally decided to check it out. After all, they claimed it was the best YA trend-setting novel since Twilight. And since I'm not a big fan of vampires (and all of that teen angst), I immediately jumped on the bandwagon.

I was wowed! And amazingly so. The writing is very gripping and moves along quickly.

It follows 16-year-old Katniss Everdeen, who lives in a post-apocalyptic world, and her journey to becoming a "tribute," which is another word for contestant in a Survivor-like battle-to-the-death Hunger Games that occurs every year. Since her District (of twelve total districts) has to submit a girl and a boy tribute, aged 12-17, for the Games, she finds out that the boy tribute is Peeta, who claims he's in love with her. But only one teenager can be victorious in the Hunger Games.

Though there is blood and gore and, basically, murder (which is criticized by some parents), I really think it brings up a lot of modern-day issues about war, government oppression, mind games, survival, and the value of life. While the whole premise of a fight to the death isn't new, I think Suzanne Collins has done a really good job of giving it new spin for teens.

I haven't read anything this page-turning since Harry Potter. So, if you haven't read it, definitely do! It's rated YA (not JV) because of the graphics of the killing...so, a caution if you're uncomfortable with that.
at 3:42 PM