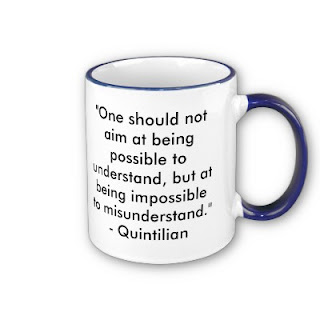 source
Last weekend, I had the priviledge of attending a mini workshop at Tempe Public Library, hosted by the East Valley Nanowrimo group. The focus of the lesson: editing. Taught by romance writers Viki Lyn and Donna Hatch.

Here are some points the two women highlighted.
1. Adjectives and Adverbs - Less is more. Not every noun needs an adjective, or even a list of adjectives. And careful with the -ly words; too many "terrifyingly wonderful moments" can be too much. Sometimes finding the right adjective can narrow down your list.
Example: "a tall, blue-eyed, broad-shouldered, sensitive, good-looking, talented man" can definitely be shortened into more sentences or even described as such while scattering the details of his character throughout the paragraph.

2. Cliches - the bane of every writer's craft. Try to twist a cliche around by rewording or, for a character cliche, try to give him/her a quirk.
Example: "tall, dark, and handsome" and easily be written another way: "his dark eyes peered down at her (implying tall) and she could easily see herself falling in love with him (implying handsome or easy on the eyes)"

3. Walking the Dog - not every action needs description if it only serves one purpose. If you're describing a girl's wake-up routine ONLY to show that she's OCD (and not furthering the plot), then this mundane action is unnecessary. Scenes need to serve more than one purpose.
Example: She picked up the toothpaste and unscrewed the plastic cap. Then, she liberally squeezed the tube so that the paste came out onto her brush in a perfectly straight line. She eyed the line and, once satisfied, put the toothpaste down and began the daily routine of swishing the brush back and forth. (This is SO boring and mundane, why would you include this?)

4. Redundancies - this is not just about repeated words or phrases, it is also about repetitive action words.
Example: "You're just not getting it! UGH!" Andrew shouted angrily. (You can see that Andrew is already frustrated and angry, so "shouted" and even "angrily" aren't really necessary.)
Other examples highlighted: "cold ice" "baby puppy" "tightly clenched fist"

5. Show vs. Tell - this is a basic, but it was explained really well by Viki and Donna. They said that if you're using a lot of "to be" verbs (is, was, were) or "to feel" verbs, you are telling/explaining to the reader what the character is doing...as opposed to showing.
Example: She felt cold. (telling you she is cold)
A chill ran up her arms, covering them with goosebumps. (showing you she is cold)

6. Sublety - leave some mystery, but don't leave too much out. Sometimes readers can read between the lines. If a girl is having a conversation with her crush, not everything needs to be written out. You can already picture her playing with her hair, stuttering, etc. Just be careful about being TOO subtle. As the quote above says: Aim at being impossible to be misunderstood.

7. Dialogue tags - sometimes dialogue tags (he asked, she replied) are unnecessary. And too much variety is distracting. When in doubt, use "said." It is invisible.

While, most of these tips are pretty obvious to me, I hope you can learn something from them. Happy Editing!
at 12:31 PM

Email ThisBlogThis!Share to TwitterShare to FacebookShare to Pinterest
Labels: writing