Make It or Break It as a jump off? 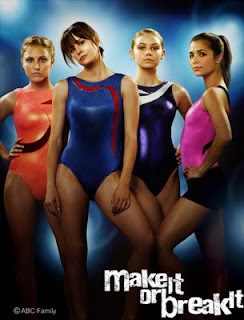 source
I stumbled upon ABC Family's Make It or Break It on Hulu last year. I think I found it because I had been watching The Secret Life of the American Teenager and got so sick of the drama on that stupid show that I moved on to more drama on Make It. lol.

Anyway, this show is nothing special. It's about 4 up-and-coming gymnasts in their gymnastics world and all of the drama that comes with that...boys, dedication, distractions, coach problems, etc...if you're wondering. It's for teens. It's silly. It's teen drama...with mediocre acting.

I like the show for two reasons:
1) My favorite character's (Payson) mom is played by Peri Gilpin, of Frasier fame (she was Roz Doyle).
2) It showcases real gymnastics here and there, which is fun to watch.

So, all this ado is to highlight the fact that I have seen 3 of these actors in other shows in the past week! Seriously...all within the same week!

Neil Jackson - the guy who plays Sasha Beloff, the Rock coach - I saw him in the new British revamp of Upstairs, Downstairs.

Eric Palladino - the guy who plays Marty Walsh, the Denver coach - I saw him on the latest episode of Castle ("The Dead Pool").

Josie Loren - the girl who plays Kaylie Cruz - I saw her on the same Castle episode ("The Dead Pool").

Which makes me wonder at how popular Make It might be? Coincidence, who knows...?
at 12:55 PM