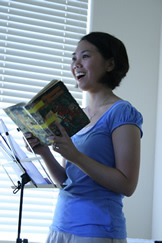 Welcome to Grammar Lesson Monday!
This continuous series will address many common grammar mistakes made in the media and that I've seen more than once.  I strive to make the world a better place with good grammar.

Today, we will learn about dangling participles.
This is more of a writer's common error than someone who is speaking normally.

I'm going to use a lot of technical grammar jargon first...
Dangling participles are phrases that are used to preface a sentence but modify the wrong noun/pronoun.

In other words...
The phrase that is tagged onto the beginning of a sentence sounds okay initially, but when you look at it closer, it doesn't sound right because it is describing the wrong subject.